On Tuesday 20th Feb. at The South of Perth Yacht Club, in Applecross I gave the Attadale Probus Club a quick talk about commercial operations of Remotely Piloted Aircraft (Aka Drones).

This was followed by a short demo flight around the SoPYC. The flight was of course formally approved by the SoPYC management.

An interesting safety issue was that the SoPYC had a regatta on and another drone was known to be following that. Additional caution was therefore required.

I believe the talk and demo flight were well received, I know the interest of many members was high.

I would like to thank the Attadale Probus Club for allowing me to give the talk and the nice bottle of red wine gift. 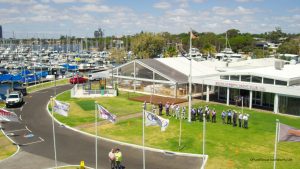 Attadale Probus members outside SoPYC. Photo taken from 50m away and zoomed in